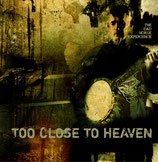 TOO CLOSE TO HEAVEN / CD album

4. Lord Must Fix My Soul

6. Were U There (in Bookholzberg)

7. Find My Body Down "Primitive, crazed but surprisingly powerful spiritual blues
Dad Horse Ottn is the slightly touched, more primitive country cousin of David Eugene Edwards. He plays (using the word in its broadest sense) banjo and kazoo and sings twisted gothic country with something of a religious bent. But, and it’s an important but, he has a sense of humour, evidenced on “Lord Must Fix My Soul”, the third cousin of Warren Zevon’s “Excitable Boy” and the laconic narrator of “Find My Body Down.” Elsewhere the redemption of “Through the Hole” contrasts with his bleak take on “Were You There (When They Crucified my Lord”). Outsider music at its most extreme, this German band could teach its Americana musical cousins a thing or three about dark and dirty music." (Americana-UK)

CD is also available as bundle: