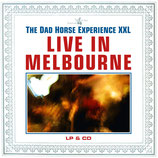 LIVE IN MELBOURNE: 12" LP plus Bonus-CD

The Dad Horse Experience XXL are

12" vinyl LP with 9 songs PLUS Bonus-CD with 4 more songs and all announcements on 20 tracks!

On Christmas Day 2011 Dad Horse Ottn flew from Bremen, Germany over Shanghai to Melbourne, Australia for to spread his „Keller gospel“ down under for the very first time: the kind of Gopsel which is not meant to be sung in the churches and cathedrals, filled with light, but to be sung in the dark basements of the soul,  the places of loneliness and despair where the light is so abundantly missed.

The years before, Ottn, and his little Citroen C3, would travel and play the hills and stills of Europe between Potsdam and Porto, between Rotterdamm and Rome as a One Man Band. In his trunk he had three albums, the last of it published in 2011 under the suggestive title „Dead Dog on a Highway.“  And as long ago as 2010 he has been travelling the United States, Nashville and Memphis, the spiritual motherland of his music. Here as elsewhere the self taught musician played solo, accompanying his songs with banjo, bass pedal, kazoo and mandolin.

Now for Australia, the most distant destination of his musical pilgrimages, Ottn assured himself the support of two versed native musicians: Renato Vacirca (Puta Madre Brothers, Vulgargrad) on drums and Anto Macaroni (Puta Madre Brothers, Made for Chickens by Robots) on the electric guitar, under the moniker „The Dad Horse Experience XXL“ these three musketteers of Kellergospel played the Falls Art & Music Festival in Victoria and the prestigious MONA FOMA Festival in Tasmania beside a good number of club shows between Melbourne, Canberrra and Sydney.

Dad Horse's often-lauded songwriting skills and his amazing and unique technique of bass pedal and banjo were dynamically accentuated by Vacirca's versatile drums and Macaroni's guitar added a good dose of atmosherical dense Italo-Western, not so much involing a plate of spaghetti but a portion of tortillas filled with meskalin.

The three week tour ended with some club shows in Melbourne, two of them were recorded. As with most shows of  The Dad Horse Experience, a substantial part of the shows at the Old Bar in Fitzroy and the Retreat Hotel in Brunswick consisted of Dads evangelistic banter, the small announcements between song about dried up rivers, dead mothers in heaven, dogs on portuguese roundabouts. In his deep German accented English Ottn  unfolded all this in front of a successfully mesmerized audience .

We are proud to present the fruits of these two nights as a 12 inch & bonus CD album „Live in Melbourne“  as a cooperation of Germany based labels Fuego and off label records. The vinyl LP contains nine songs including the popular „Lord Must Fix My Soul“ as a 12 minute version with brief explantions to each verse. These parts – as in the announcement for „Falling“ - prove as much the pun of Dad Horse as the rapport between band and audience. The musical range goes from a tarantella-like „Merchandise Song“ and a rocky „Gates of Heaven“ over a blues traditional „St. James Infirmary“ to the racing „I'm not here anymore,“ closing the LP like a psychedelic steam trainwreck.

The included  Bonus-CD contains all tracks from the vinyl LP plus four bonus songs such as a version of „Will The Circle Be Unbroken“ and Hank Williams' „Lost Highway“ and the complete announcements to nearly every song.